The preamble:
Mr #14 and I first got chatting online through a dating site a month or so ago, and over the last few days due to him suffering some sort of fat-thumbs syndrome affecting texting on his touchphone, we started chatting over Facebook. This was a bit of an online dating first for me, as normally I tend to avoid the sharing of any sort of social networking sites, mainly for the barrage of embarrassing personal information on them, but also because my ridiculous blogging exploits are shamelessly splattered all over them. However on revealing that in some swift social networking searches he'd found my Facebook, Twitter, LinkedIn profile AND this illustrious blog, I had pretty much nothing to hide. He was well aware of the ongoing emotional embuggerance of Mr Third Party who had been occupying a lot of my mind time over the last week, and even though he knew he'd be written up in true 52 First Dates style, he agreed to meet up anyway, which to be honest was just what I needed to take my mind off the other emotional turbulance. But since he lived out in deepest darkest Dagenham, we agreed to meet somewhere halfway. But sadly for both of us, that halfway was Barking. Dear, sweet, phenomenally dump-worthy Barking.

The man:
Age: 23
Profession: Financial analyst sort
Random factoid: Hails from Lithuania. That's right, a real life Lithuanian. Who'd have thought it!
The date:
I think we've established already we were going to meet in Barking. I can't stress that enough.  Fucking Barking. I'd managed to notch up some significant pre-date nerves on this one, mainly because Mr #14, who from hereon in will be known as the Lithuanian Ninja for reasons I won't be able to properly explain, had suggested that as a challenge, when we were to meet at the tube, we were to stand there for 1 to 3 minutes in silence and stare at each other. At which point he would most probably kiss me. Hmm. Cue a massive swoosh of typical British pre-date prudishness. But when in Rome, or more aptly, when in Barking with a random Lithuanian, you go along with it. Anyway, I turned up at the station, and as promised, the Lithuanian Ninja just stood and stared at me. I giggled awkwardly. Fortunately for me, he decided to break the stare-stalemate and let me escape snog-free. He'd been prudent enough to google a local park so we could go for a little walk and a chat. Barking Park to be precise. So wandered, and we chatted, largely about how he thought I could improve my blog, which was some rather fabulous constructive criticism. We ended up grabbing a seat in the park in a description that I can only describe as halfway between a pikey funfair and a rubble dump. I took the time to photograph the location in detail, just to create the full mis-en-scene. So here we go. Brace yourself...
The view to the left: 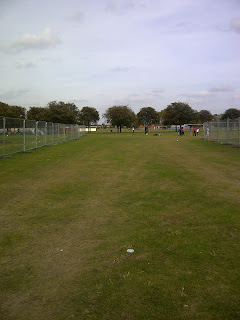 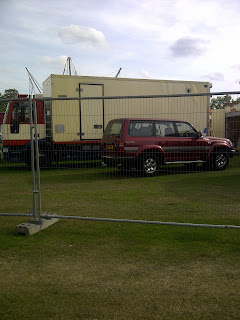 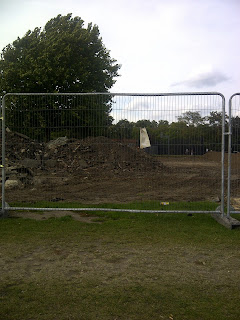 So here we were, perched in Essex's finest green land, and conversation kicked off. We covered poverty, academia, job-hunting, Eastern European languages and the paragon of British culture that was modern day Essex. The wind picked up and we started to get chilly, so as sad as we were to leave the glorious vista of rubble, we wandered off in search of some sort of coffee. It soon emerged, contrary to his previous claims of being a ninja, that the Lithuanian Ninja had left his ninjic tendencies at home, as I had to save him from being flattened by oncoming traffic at least twice.  And it also soon emerged that Barking lacked any sort of commercial coffee house ever! We traipsed around the town centre for ages, and not even a sniff of a Starbucks, the faintest clue of a Costa and no Cafe Nero. The one place claiming to vend hot caffeinated beverages was closing its doors, so we had to resort to a location possibly even more spectacular than Barking Park. Yes, you've guessed it: Barking Shopping Centre. What more romantic a setting for a date, than being sat in the middle of the worst shopping centre known to man, opposite an Asda, supping gritty milkshakes. Well, we did it. And you know what? It was fucking hilarious. I was soon realising that the Lithuanian Ninja was a funny funny guy. He had a great sense of humour about the actual dating blog, the English-Lithuanian divide and the cultural hellhole that was Barking. He was also incredibly keen, and was not shy in letting me know, either by trying to sneak in a cheeky hug or by repeatedly saying 'I like you'. Since the whole snog-orientated preamble, I had sensed there may be a kiss in the offing, and whilst perched on the faux-leather sofa of Cafe Aroma and basking in the flattering neon lighting of Holland and Barratt, I did concede a cheeky kiss or two. What can I say, the romantic ambiance of Barking Shopping Centre must've caught me unawares! That and the intoxicatingly high sugar content of my mango smoothie. At this point, the Lithuanian Ninja made it clear he thought he was a genuine contender to thwart the future of 52 First Dates, a bar I fear is almost impossibly high these days. Soon the tannoy clamoured the closing of the shopping centre, and we moseyed our way back to the station to say our goodbyes.
Memorable Quotes (of which there were many):