The preamble:
I've been messaging Mr #11 for a wee while now, and although on the face of it he wasn't the usual kind of guy I'd normally go for, I knew pretty early on that he'd be an evening well spent regardless of whether there was any chemistry or not. He'd been very playful, and we'd already had some very funny banter about coriander, his favourite thing in the entire world, and a substance I have dubbed 'the evil weed'. But putting herbal differences aside, we agreed on a cilantro-free venue and the date was set.

The man:
Age:37
Profession: Artisan crafstman slash electrician
Random factoid: Once heckled Nick Cave in a Q&A session
The date:
I'd been warned early on that Mr #11's football team's performance had left him a state of emotional distress (oh dear Arsenal, oh very dear, thwarting my dates so, Wenger you big old bastard you), so I was under pressure to make the evening an improvement.
He was running late thanks to neglecting to check TFL so I sorted myself out with a drink and waited for him to pitch up. Eventually, Captain Coriander blustered in with a faceful of apologies for his tardiness, this awesome shock of black curly hair, a delightfully shambolic manner  and I knew we'd be in for a fun evening.
I did initially have reservations about age, since he was my oldest date to date (not that it's an age gap of Anna Nicole Smith proportions but you know what I mean) but after he'd acknowledged the fact I was a bit younger that was that and it wasn't mooted again.
Conversation was really varied, from his love of ancient history and Thailand to Polish builders, dads, Wiis and tragically losing his little sister. He also revealed his obsession with origami, not to mention the incredibly vexing petal technique (which I heard about in great great GREAT detail), and when I was at the bar he knocked me up a little flapping bird out of the Racing Post.
Since it was a bank holiday Sunday and no-one had work to do in the morning, we decided to move on to an awesome rockabilly bar with bras on the ceiling and continued the banter. This was an evening of a few #52firstdates firsts...he was very complimentary and for once, because I need these things spelling out for me, I was aware that he actually fancied me.
I think maybe there must've been something in the air in that bar though, as every time he popped off to the loo, some random boy would pop up and try and chat me up. Very strange. It got to about half twelve and I had to call time on the night on account of extreme tiredness and an ever-increasing vodka-to-blood ratio. We ambled off to get the night bus, which in true TFL style didn't turn up for 45 bloody minutes. Still, to while away the time we shared a lovely little kiss and a cuddle at the bus stop like some silly teenagers, and went our separate ways.
Memorable Quotes:

Events of note:
I have never seen beer come out of someone's nose before like a sprinkler system. Until tonight. Dear lord!
The verdict:
I have to say Captain Coriander was excellent company, and one of the most down-to-earth guys I've met so far. I think he may be keen to meet again, and if he is I think I would like to see him again, just to see if there may be anything there other than booze-induced snoggings. 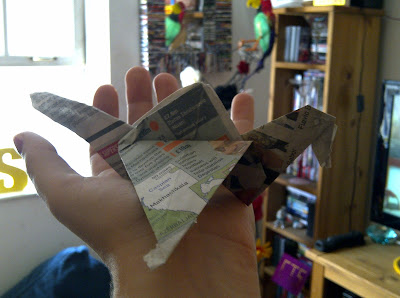