The preamble:
I initially replied to a message from Mr #20 because, and I'll be brutally honest here, he was a giant. Regular readers of 52 First Dates will know my feelings towards gentlemen of the diminutive stature, so I thought fair's fair, let's give a giant a go! And by giant, I mean 6'6", which is a good 16 inches taller than me. Let's face it, the wedding photos would look bloody hilarious! However, after replying to the first couple of messages, I appear to have unleashed something scary.
Every day, without fail and without reply from me, he would send me a very long message rambling on about all sorts of random stuff and usually trying to force more methods of communication upon me, email addresses, phone numbers, Facebook links. After a very hectic work schedule rendering me pretty useless at responding, and the fifth unanswered message in a row, he sent me a very pitiful email bemoaning my lack of contact and that he wished me all the best for the future. Dammit, you're needy! I eventually responded, because you can't get away with messaging people like that in online dating, no wonder you're single! Normally I would have not bothered, but I won't lie, I felt I needed a giant on my dating CV so I swallowed my instinct and replied apologising for being unavailable, but that I'd been busy. He was rather shocked by my honesty, and rapidly started back-peddling, apologising for his innate clinginess. Although this was then totally negated by enquiring as to what I was doing for a certain date in late December. Easy sunshine!
Eventually I caved in and arranged a date, but after that sort of preamble, I wasn't really looking forward to it...
The man:
Age: 35
Profession: Social worker
Random factoid: I think the fact that he is 6'6" tall definitely has to go in this box.
The day of the date:
Today has been a weird day. Anyone familiar with previous posts will be aware that there has been a third party wafting around my romantic periphery for some time now. To explain, he was a boy I met online last December. He was a musician slash actor slash owner of indescribable hair, we went on a date, rescheduled for after Christmas, and then he vanished into the ether. But back in June, out of the blue, he appeared again through the same dating site, and we'd been messaging constantly ever since. This is a boy with major commitment issues, who's been buggering me around by being as intense as you can get, then falling off the radar. This has gone on for 4 months, and despite numerous attempts on my behalf to arrange a meeting, today I finally decided to pull the plug.  And not a day too soon, since a fortnight ago he confessed to meeting another girl, randomly booking a holiday to Vegas with her as a 'joke', insisting he didn't like her, but that he was going away with her anyway. Seriously, what planet are you on??? I'm just not cut out for that sort of game-playing. But truth be told it has made me really rather sad, mainly because it would've been so easy for us to meet up and see if we really got on as I thought we did, but his eternal embuggerations made it totally impossible. But I'm fed up of being dropped, picked up, dropped, picked up, dropped picked up, and so with great sadness, I told him no more. So that's that, 52 First Dates is no longer at risk of being thwarted. And when you read the rest of this entry, you'll see that's still the case.


The date:
So, it's a Monday, it's Hallowe'en, I'm feeling miserable, so what better way to spend such an evening than with a giant. A great big needy giant. And he wasn't lying about his height either, as many men do online, he really was the tallest man I've even met in my entire life (even taller than my friend Katy's dad - he's a giant too).
He was also a bit of a man mountain too, clad in double denim no less. Hmm. He also had a substantial amount of facial piercings which were not evident in his profile pictures, including a blue sparkly rhinestone in his nose.
He was jolly enough in person, although not green enough to be in a sweetcorn ad, but I thought he'd be pleasant enough company for the evening. Conversation kicked off, he spoke at great length about his 5 year old son who he clearly adores, his curiosity about my working schedule that had made me so unavailable, the fact he'd not had a girlfriend until he was 21 (although not intimately apparently, thanks for that Mr TMI dot com!), his MOT, an affair he had with an older married woman, the London riots, insurance claims and modern manners.
What I liked about his was after our second drink, he called it a night as he was aware how hard I was working. But not before spending the last ten minutes asking me over to his for dinner this Friday, offering to drive me round London, seeing if I could take a day off next week or if he could come over to see me for an hour one evening. Christ, give a girl a break!
After the bitter sting of rejection recently, don't get me wrong, it's all very flattering and it's lovely to know I'm not totally repulsive to the male race, but this is just too much. Seriously too much. I've only just met you, I'm not coming over to your house or getting in your car. No way. Especially when you see the event of note...!

'I used to really want to show Old English Sheep Dogs at Crufts. But all the men who show dogs at Crufts are gay. And I'm not gay. But I don't like how they poof up the dogs tails. It looks stupid.' 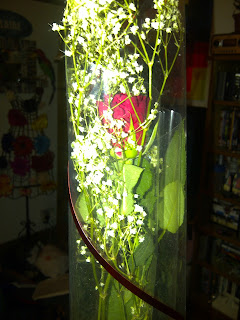 Yup, it's a single red rose. I've been promised a lot more in the future. Dear Jesus...
The verdict:
Considering my dread before the event, it was a surprisingly nice evening. But the long and short of it is, I didn't remotely fancy a man with a face like a sieve, bigger boobs than I have, who could probably hospitalised me if I accidentally got in between him and the sofa.
He also called me 'babe' like it was going out of fashion. Plus anyone who uses LOL in a non-ironic sense is more than enough to grate on me, but someone who uses LOLOLOL as if it actually means something (laugh out loud out loud out loud? Seriously???) is someone automatically red-carded from my romantic playing field.
On a more serious note, he was also the first parent I'd met out dating, and although I absolutely adore children, I'm not sure how I'd feel about getting involved with a parent at this stage. Maybe if the right man came along. But sadly, the Double Denim Big Friendly Giant isn't him...