The preamble:
Mr #44 and I have been texting on and off for what seems like forever, but in truth I think it was around Christmas when he sent his first fateful message. His dating profile was minimalist, but he appeared to be a very svelte, elegant and handsome Indian fellow from his profile (like he was modelling for an catalogue company - lots of choice knitwear) and he sounded pretty keen, so we exchanged numbers.
But 4 attempts to meet later his texting was getting a little irritating, and I think he may now hold the record for the most uses of the word 'babe' in the course of our messaging history, which regular 52 First Dates readers will acknowledge is a real pet peeve mine. We'd been messaging so long, and he was trying to spark up text chats during work on such a regular basis, I decided we really should meet once and for all lest we ended up texting until Hell froze over. So finally, after months or sporadic and partially irksome messaging, we arranged the date.
He chose the venue, and it was in a brand new pub...right in the middle of Kings Cross station. Hmm...
The man:
Age: 38
Profession: IT developer

Random factoid: Used to be an extra, and has starred in such commercials as McDonalds, Barclays and Halifax (he was one of the people making up the giant X).
The date:
I bowled up to the date a bit late on account of being distracted by beverages with workmates, and the first thing that struck me about my date, when I eventually identified him, was that he looked nothing, and I mean NOTHING, like his profile photo. He was about a foot shorter, a foot wider and none of the luscious hair previously depicted in his photos. There was also a distinct lack of knitwear, and he was clad head to toe in a very crisp business suit complete with novelty cuff links. I, however, had turned up in jeans, converse, shirt and waistcoat and headscarf. It rapidly occurred to me that we were by far the oddest couple in the bar (which was surprisingly nice for a venue slap bang in the middle of a train station), and anyone looking at us would have instantly spotted that we'd met online, as we were, most probably, the oddest couple in the actual world. It was almost laughable.
Mr #44, however, was very cheery and polite, so we grabbed some drinks and set about possibly the most elusive date of the quest. Pretty much the first thing Mr #44 brought up was the subject of online dating - it turns out he was new to t'interweb dating having escaped an arranged marriage, and I was the first person he'd met. He seemed baffled that I had told people about the fact I did online dating as he found it embarrassing. I, obviously, underplayed my involvement for obvious reasons.
We spoke at length about his all his older siblings had been married off in an arranged fashion, but following the death of his mother, his father had chilled out a bit and let forced nuptials slip for the sake of his youngest son - pretty intense for the first 15 minutes of a date! He then started probing into the circumstances surrounding my singledom, and before I could protest my innocence he launched into how he'd tried to rekindle the love of his life a couple of months ago, but she'd knocked him back, and going online for dates was his rebound mechanism. Good-o!
Anyway, once the deep and meaningfuls had been covered, the lighter chat got underway. I did have to question the inconsistency between his photo and the reality as it was such a drastic difference, and he claimed that his photo was from 5 years ago. And actually it probably was from 5 years ago...from someone else's Facebook profile!
It turned out he's quite the telly fan, being a massive EastEnders fan, and a connoisseur of all things Take Me Out, Britains Got Talent, X Factor and The Voice. He spoke with great adoration for a little known character called William on the latter (or Will.I.Am to everyone else in the world).
Once on his favourite subject and he'd relaxed a little, there was no stopping him! He then revealed his love for old school movies, and he had an almost Rainman-esque knowledge of Carry On films. He then moved onto his various talents, of which creating council tax databases, drawing and dancing were but a couple, and he recreated with glee and gusto his audition dance to be part of the Olympics opening ceremony dance. He'd made it through to the second round, and was pretty confident that his skills would be seen by the entire globe, so when you watch the opening ceremony, keep an eye out for the Indian guy from the background of a McDonalds advert who looks nothing like a tall, slim handsome catalogue model throwing some rather spectacular shapes.
Mr #44 was a fidgetty sort, and the more he spoke, the more he involved himself with some rather off-putting under-the-table scratchings which increased as the evening went on. But he was really entertaining company, but I have to admit I was relieved that the babe-infused textings might finally be over.
Memorable Quotes:
When I returned from the facilities - 'what did you think of the toilets?'
'You have perfect eyebrows'
'George Clooney, he's such a heart throbe, I think he's the ultimate heart throbe'. (note - I have not misspelt this quote)
'On Saturday night, I love to get takeaway, and sit in and watch TV all night at home. In my 3 bedroom house.'
Events of note:
After declaring his skills at being able to draw 'with a pencil, on the papers, bare-hand', I challenged Mr #44 to demonstrate his skills, and demonstrate them he did. This is what he did. I think I should point out that although, this is pretty much exactly what I look like in real life (and yes, I am just as sketchy...) 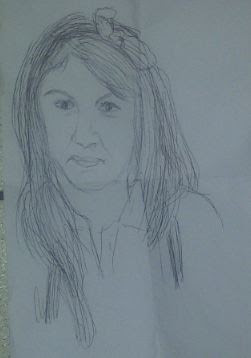 The Verdict:
Bless him, Mr #44 was excellent value, and he absolutely has a heart of gold. But I don't think I've ever met someone so drastically different to me, and although it made for a good write up, I was never destined to move to Romford to spend my Saturday nights in eating fried chicken and watching talent shows.
Within 10 minutes of my getting on the bus, he'd texted to try and arrange another date. I'd dozed off on the bus before replying, and half an hour later when I awoke to get off at my stop, he had messaged again pressing for an answer. I graciously declined, but I wished him well on his quest as I'm pretty sure there'll be a chicken-loving lady out there somewhere for whom Essex and X Factor are the absolute dream. But not me. That said, that chicken burger was rather lush...
Posted by CTS at 4/21/2012 11:44:00 am