You may be asking why, after my recent Catfish debacle, that I'm so willing to take the plunge back into the metaphorical dating pool. Well, I figure why not? I've already sussed out one of the weirdos, I'm pretty sure I can sniff out the rest of them. So now, I am prepared. Oh yes, I've got armbands on. Famous last words? Probably...


The preamble:
Mr #5 was actually one of the very first boys I started messaging during the #52firstdates project, but our delay in meeting is all to do with a 2 week holiday in Dubai (his, not mine), and an all-consuming dating-related nightmare (mine, not his).  From the off, I liked the sound of this lad. We had the same taste in comedy, and he had a charmingly colloquial way of messaging. And not even one sniff of a LOL. And he looked cute to boot. Nice. Before he went away, he'd promised me a drink on his return if I was still interested, and I said only if he brought me back a snowglobe of the Burj Al Arab.  He trotted off to the Middle East, I trotted around London town for a wee while, and needless to say, he got back to the UK, got back in touch, communication recommenced, and finally we sorted ourselves out a little date.
The man:
Age:28
Profession: Still strangely cryptic...in short, I still have no bloody idea! Not for want of asking...I suspect it's something a little underwhelming, but as long as it's not a primary school teacher, I couldn't care less!
Random factoid: Is living with a terrorist. Well, for 'is' read 'suspects he might be'. So maybe less of a random factoid and more controversial conjecture...
The date:
Once again the venue was my choice, somewhere near work, but given that I was running late from work and he was more than happy to pop along Waterloo-wards, it all worked out rather well. I met him outside the bar, and to my overwhelming relief, he looked exactly like he was supposed to. And he was very cute, neatly packed into a polo shirt and crowned with a rather sweet flat cap. Already my faith in the male race was more than just restoration-in-progress. Once inside, not wanting to dally, he ordered us a cheeky bottle of vino. Nice - clearly not too frightened of me at first sight to commit to more than one drink. Conversation was not a problem at all, I rather boldly/foolishly bulldozed in there immediately with the ridiculous story of my ongoing date-fright with Mr/Mrs #2, and he was very entertained and incredibly forgiving that I'd buggered him around in finally getting round to a date. We covered a lot of mutual ground, arachnophobia, Paranormal Activity, lesbian double lives (friends', not our own...), why cats rule the world and the various accents of the British Isles. The bottle disappeared, and we decided on another glass for the road, and before we knew it, the bar staff were telling us to foxtrot oscar. We took the tube back as far as our common journey took us, he walked me to the platform, gave me a hug and said he'd hoped my date had been better than the previous experience. Once on the train, I got a rather sweet text to say thank you for the evening, and we both bidded each other nuhnight.

Memorable Quotes:
'Goldsmiths students scare me. Why do they need such big ginger beards?'
Events of note:
The surprise arrival of a Burj AL Arab snowglobe. Literally amazing. Funny AND thoughtful.
The verdict:
I have to say I had a really lovely evening with a guy who seemed fun, funny, sweet and understatedly charming. I don't know if he'd like to see me again, if he asked me I definitely would. But I'm not sure if I could get away with asking for a second date without looking over-keen. I'll just have to keep a sly eye on the BlackBerry just in case he decides to get in touch again... 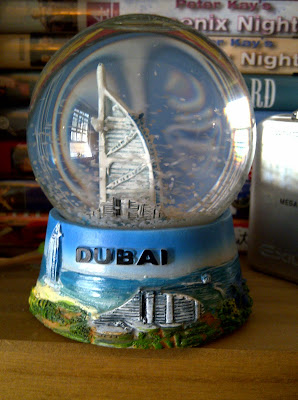